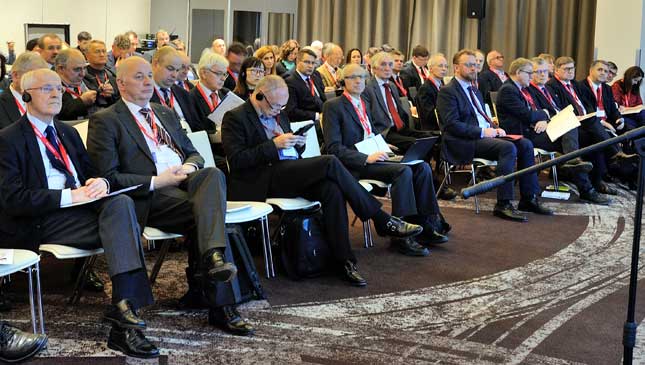 Research universities, initiatives of excellence, international and national rankings, accreditations, innovativeness of higher education were the most important topics of the the second conference "Polish universities in the global perspective - Rankings and strategic management of a university ", held on November 27-28 in Warsaw. Over 160 participants from Poland and abroad took part in it. The honorary patronage over the conference, organized jointly by Conference of Rectors of Academic Schools in Poland (CRASP), Polish Accreditation Committee (PKA) and Perspektywy Education Foundation, was taken by Deputy Prime Minister, Minister of Science and Higher Education Jarosław Gowin.

The second edition of the conference was hosted by prof. Jan Szmidt, president of Conference of Rectors of  Academic Schools in Poland (CRASP), prof. Krzysztof Diks, president of Polish Accreditation Committee (PKA) and Waldemar Siwiński, president of the Perspektywy Education Foundation. Excellent guests: prof. Łukasz Szumowski, Undersecretary of State at the Ministry of Science and Higher Education, prof. Jerzy Woźnicki, president of the Central Council of Higher Education, prof. Maciej Żylicz, president of the Foundation for Polish Science, dr Zygmunt Krasiński, director of the National Contact Point "Horizon 2020", dr Paweł Poszytek, general director of the Foundation for the Development of the Education System (FRSE), dr Łukasz Wojdyga, director of Polish National Agency for Academic Exchange (NAWA), Felix Haest, vice president of Elsevier - substantive partner of the meeting took part in the conference. Universities were represented by rectors, vice rectors, directors of international cooperation offices, development, as well as ranking offices that were created in many universities.

- We want to look once again at our universities from an international perspective, it is necessary for the proper development of Polish higher education – said during the conference opening Waldemar Siwiński, president of  Perspektywy Education Foundation,.

- We have excellent infrastructure, scientific potential as well as excellent youth - emphasized prof. Jan Szmidt, president of Conference of Rectors of  Academic Schools in Poland, rector of the Warsaw University of Technology. - It is time for the Polish scientific world to invite European salons and visit them regularly. Internationalization is one of the most important factors for the development of Polish universities, so I am convinced that we will be able to share more and more spectacular effects of this process during the next editions of this conference.

When one of the younger colleagues asks me how much work he should write to do habilitation, I answer: just work well and success will come - said prof. Krzysztof Diks, president of the Polish Accreditation Committee. -  It is a similar situation with Polish science: if we want to function well internationally, let's start with ourselves, from the quality of our scientific work.

Professor Łukasz Szumowski, undersecretary of state at the Ministry of Science and Higher Education, explained to the conference participants the assumptions and objectives of the new evaluation system provided for by the Act 2.0. - It is to be an incentive to strive for excellence ("excellence"), because we want Polish science not to be only "good average". We will appreciate excellence, because the best ones are our pass to global science - said prof. Szumowski.

During the eight sessions held during this year's conference, experts and participants discussed, among others, about the experience of implementing "Excellence Initiatives" in other countries, shaping the culture of quality in research, research universities, the place of Polish universities in international rankings, the possibility of ranking art schools. The session "International rankings without secrets - opportunities for Polish universities" aroused enormous interest, in which the representatives of prestigious international academic lists: the Shanghai Ranking, the CWTS Leiden Ranking and the U-Multirank information system took part.

During the conference, the topics of international accreditation and innovation of Polish science were also discussed extensively.

Universities contributing to the reputation and perception of Polish science in the world received Elsevier Research Impact Leaders awards during the conference.

The next conference from this series will take place at the beginning of December 2018.