In search of academic excellence 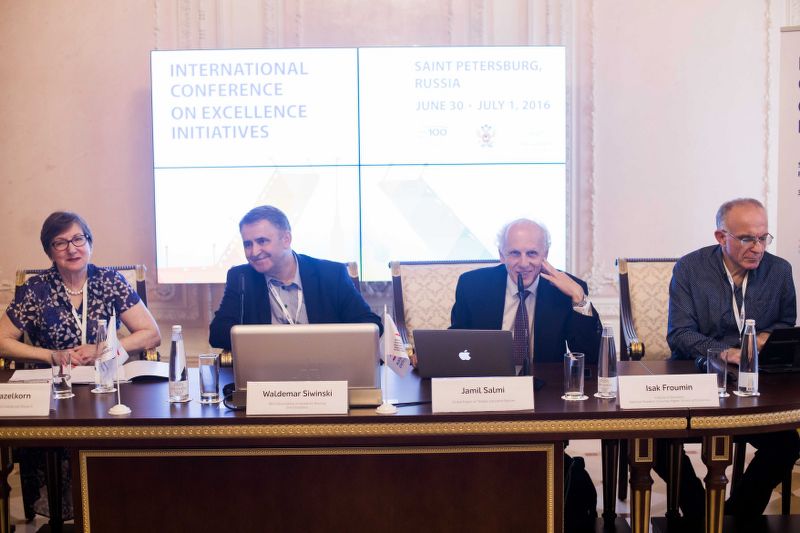 The International Conference on Excellence Initiatives took place June 30 - July 1, 2016 in Saint Petersburg, Russia. The conference was organized at the initiative and by invitation of the leadership of the Russian Academic Excellence Project 5-100. ITMO University played the role of the conference’s host, and Perspektywy was responsible for organization and functioning of the International Speakers’ Secretariat.

The aim of the conference was to bring together the agencies involved in the implementation and coordination of excellence initiatives in their respective countries. The conference was a platform for sharing knowledge and experience in implementation of excellence initiatives and developing collaboration between the agencies from different countries.

Among the speakers from 11 countries were representatives of the excellence initiatives from Germany, France, Japan, Canada, Spain, China, Russia, Luxemburg, Poland and Portugal; representatives of international organizations (IREG Observatory on Academic Ranking and Excellence), and members of the management of universities participating at the 5-100 Project.

The experts discussed the most burning questions dedicated to such topics as: management models and the role of a state, effectiveness assessment methods and distribution of funding among the HEIs. Alexander Povalko, Deputy Minister for Higher Education of the Russian Federation, remarked that the main aim of the Conference was to fully and deeply show the existing methods of running such initiatives.

“What is an excellence initiative? It is a decision taken by the government, to allocate more funding for several universities in comparison to the general funding of the other ones. Giving them additional resources, you give them the opportunity to develop at a higher tempo”, - said during a plenary session Jamil Salmi, international expert on tertiary education, former World Bank higher education program coordinator.

Isak Froumin, Scientific Director of the Education Institute of the Higher School of Economics agreed with Jamil Salmi and added: “The governments of different countries, from the USA to Australia, from Ireland to the RSA, try to actively participate in shaping the systems of higher education. University development becomes more and more controlled by the state. Previously, these were the universities that functioned as engines for their own development and challenged the governments. Now we see universities being challenged by governments to be developing in a certain direction. Excellence initiatives are the transition to the state-controlled model”.

Ellen Hazelkorn,Professor of Dublin Institute of Technology, President, Eudopean Association of Institutional Research discussed positive and negative aspects of academic rankings in the process of monitoring of the implementation of excellence initiatives. Waldemar Siwinski, Vice President of IREG Observatory elaborated on changes that will sooner than later appear in the methodology od academic rankings.

Following discussion on more general questions the meeting discussed the experience of excellence initiatives in different countries. Sabine Behrenbeck, the Head of Excellence Initiative Project (Head Office of the German Council of Science and Humanities) emphasized the importance of university autonomy. Farid Ouabdesselam, Director of Excellence Initiative Program at French National Research Agency ANR, pointed out to the mutual influence of university excellence projects in France and Germany. The French government chose the path of giving the universities maximum autonomy - they receive additional funds from endowment foundations.

According to Kevin Lapointe, Program Officer of Research Excellence Foundation Canada First (CFREF) and Canada Excellence Research Chairs (CERC), in his country the government does not exercise direct influence on realization of excellence programs. The Canadian representative dedicated much attention to the selection procedure for excellence initiative participants.

A representative of the Japan Society for the Promotion of Science, Toshio Kuroki program director for World Premier International Research Center Initiative, spoke about the goals of WPI program. One of the targets is to stimulate interdisciplinary research: e.g. introduction of mathematic approach to materials technology. The other program target is internationalization. “Science in Japan lags behind in terms of internationalization, this fact is clearly reflected in university rankings”, - said Toshio Kuroki

The Polish excellence initiative was represented by Bianka Siwinska, Executive Director of “Perspektywy” Education Foundation. The contests within the program of National Leading Scientific Centres (KNOWs in Polish) were conducted twice – in 2012 and 2014.

Peking University professor, Li Xiaoming, who coordinated the realization of 211 and 985 projects in China, spoke about concepts, experience and results of these projects at the university and national level. He alo spoke about a new initiative, World Class 2.0, being developed at the moment.

In Spain, the excellence initiative (International Campus of Excellence) was first launched in 2009, as declared by Luis Delgado, Deputy Director General of the Ministry of Education, Culture and Sport. Transfer to the economy of knowledge was pointed out as one of the program objectives, to lower the country budget dependence on such spheres as tourism and civil engineering.

The overview of the national excellence initiatives was completed by the report by Andrei Volkov, Deputy Chairman of the Russian Academic Excellence Project 5-100 Council. The speaker pointed out the most important aspect of 5-100 Project: “It started a real discussion on the future of Russian universities within universities themselves – among professors, administration and students. We now clearly see the whole sphere being mobilized”.

During the two days of the conference representatives of the excellence initiatives and international experts discussed and shared their experience on the process of implementation and relevance of academic rankings in monitoring the process.