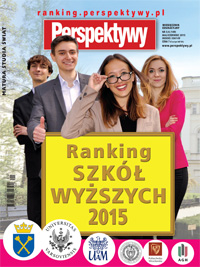 Kozminski University has defended its status of the leader in the group of private-owned HEIs. Right after if – University of Social Sciences and Humanities (SWPS), the school that not only obtained the status of an university, but also cut the gap to the leader by half.

This year Ranking has evaluated 87 universities, 70 private-owned HEIs with Master degree qualifications, 30 State Vocational Higher Schools as well as 43 fields of studies. ”Our Ranking is not just a tool to be used by secondary school graduates and their parents for further education path choosing. This Ranking is a source of knowledge on the actual state of the Polish higher education, a panoramic picture made here and now, showing Polish universities, their ambitions from different yet non-random perspectives”, Waldemar Siwinski, President of Perspektywy Education Foundation and National Perspektywy Ranking creator, says.

Professor Michał Kleiber, Chair of the Ranking Committee, former Head of the Polish Academy of Sciences, emphasizes that the Ranking may also become an indicator for a university. ”On the basis of the knowledge and the analysis of the world trends in rankings as well as the information gathered during these 16 years of national ranking experience, we may draw conclusions and suggestions on which aspects of activities should be developped and which priorities to set. If the Ranking is understood this way, it may become an important impuls to building a quality culture at univesities.”

Once again, Perspektywy Ranking by Subject 2015 was published, giving an overview of the 43 main fields of studies (by 6 more, compared to the previous year).

Overall, as many as 31 criteria were used in the Perspektywy University Ranking 2015. They were grouped into six categories: prestige - with the weight of 24%, academic strength – 15%, academic effectiveness – 26%, teaching and learning – 11%, internationalization – 15%, and innovation – 9%.

The results of the Perspektywy University Ranking 2015 were announced in Warsaw in the presence of the officials from the Minister of Science and Higher Education, and members of the Polish Parliament.

To assure quality and transparency, the Board that supervises the ranking process has been composed of former rectors and outstanding public figures. The Perspektywy ranking in fact consists of several rankings: the main and most important ranking is the overall ranking of academic institutions (universities), but it also include: ranking of master level private institutions and ranking of state vocational schools. Rankings of 43 disciplines (subject ranking) have also been published.

The 16 th edition of its University Ranking, Perspektywy is being published together by "Perspektywy" monthly magazine and “Dziennik Gazeta Prawna”, a leading Polish daily newspaper.