Prestige within reach - Polish universities in an international dimension 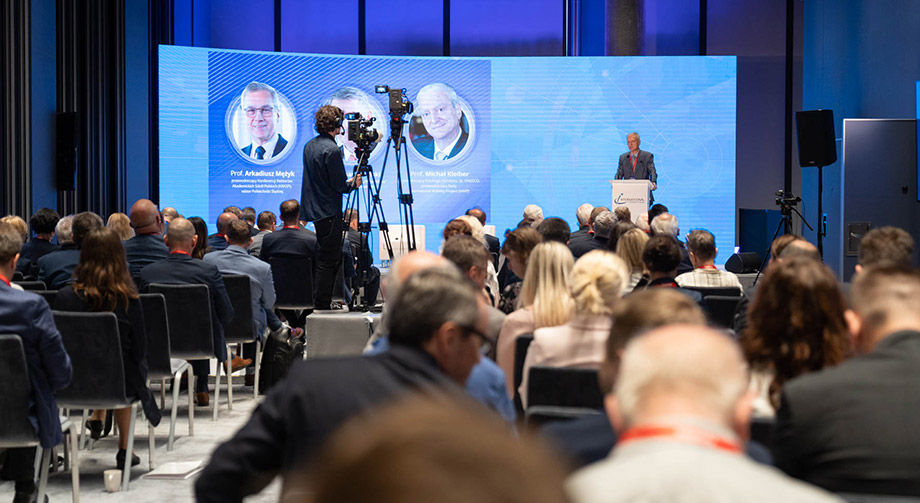 How to get to the top of the  "glass mountain" of international rankings, as well as the  European and global dimension of the functioning of Polish universities, was discussed during the 5th Conference "Polish Universities in the World Perspective - Rankings and Strategic Management of a University", which took place on July 15th and 16th in Warsaw at the Crowne Plaza hotel. It was emphasized that improving the position in the rankings is not an end to itself, but an element of building the international visibility of Polish universities, which will translate into an increase in the quality of research and education.

The conference - organized as part of the International Visibility Project (DIALOG program) - was held under the patronage of the Minister of Education and Science and the President of KRASP. Despite the summer season, the event enjoyed record popularity - over 120 people took part in person and over 300 participated online! Among them were 21 rectors and 60 vice-rectors from 120 universities, as well as heads and representatives of several institutions supporting higher education.

There were many topics for discussion in such an excellent group, some of them resulted from the specificity of the university's work during and after the pandemic.  Other topics included discussions  about activities aimed at improving the position of Polish universities in world rankings, strengthening scientific research, European universities, international accreditations and evaluating scientific activities - that is, about what is happening at the junction between our education and the world.

- I am truly touched that we can meet face to face after such a long break - said Waldemar Siwiński, president of the Perspektywy Education Foundation, opening the conference. President of Perspektywy thanked the guests for the personal participation in this event: Wojciech Murdzek - secretary of state in the Ministry of Education and Science, prof. Arkadiusz Mężyk - chairman of Conference of Rectors of Academic Schools in Poland (KRASP), prof. Jan Szmidt - honorary chairman of KRASP, prof. Zbigniew Marciniak - chairman of the General Council of Higher Education (RGNiSzW), prof. Błażej Skoczeń - chairman of the Science Evaluation Committee, prof. Marek Pawełczyk - chairman of the Scientific Policy Committee, dr. Grażyna Żebrowska - director of Polish National Agency for Academic Exchange (NAWA), dr. Paweł Poszytek - director general of Foundation for the Development of the Education System (FRSE), Krzysztof Pietraszkiewicz - president of the Polish Bank Association, Ewa Mańkiewicz-Cudny - president of Polish Federation of Engineering Associations (NOT), prof. Michał Kleiber - chairman of the International Visibility Project Council, as well as foreign experts.

- We want foreign students and scientists to come to our universities - emphasized prof. Arkadiusz Mężyk, chairman of KRASP. - We already have the appropriate infrastructure, there is still work ahead of us related to the proper preparation of the administration and other departments. That is why the exchange of good practices between universities is so valuable. A special role in expanding the international presence of Polish universities is played by the "International Visibility Project" implemented by the "Perspektywy" Education Foundation together with KRASP and other partners. Now it is important that the findings from the first phase of this project go beyond the pilot twenty and reach a wider group of Polish academic universities.

- I am glad that we are meeting in such a large group, because we will talk about issues that are extremely important for Polish science and higher education - said prof. Michał Kleiber. - Today, the University is the center of social life. The importance of knowledge and education is growing, and the reputation of universities has a significant impact on the image of the state. Therefore, the quality of universities is extremely important today and will gain in importance.

The role of the quality of education and research was discussed by Minister Wojciech Murdzek, who emphasized that we currently have tools to support this quality. Concern for a high level of education and research underpinned the adoption of the Constitution for Science. The minister also pointed out that the coming academic year will be a period of catching up with pandemic backlogs for both high school graduates and students who have been studying exclusively online for many months. - I hope that we will conduct this battle for quality together and effectively, so that its result will be a good position of Polish science and high positions of Polish universities in the rankings - said Minister Murdzek at the end of his speech. - This will have an impact on the economy and quality of life of all Poles.

Prof. Marek Kwiek, head of the AMU Public Policy Research Center, in his keynote speech "Global superleague - why it is worth being among the 1000 best research universities in the world" emphasized that the vast majority of young people (even 80 percent in the age cohort) plan to study. Higher education is becoming more and more common, but there is also a growing emphasis on the quality of education and its global and universal aspect. Being among the top 1000 is a chance to attract not only the best students, but also excellent academic staff. This is especially true in a time of progressive, research-driven global stratification of higher education, accompanied by progressive diversification of the academic profession.

The second program speech opening the conference was Waldemar Siwiński's report on the current course of the International Visibility Project, implemented as part of the DIALOG program. One of the main achievements in this area is the education at 20 participating universities of a group of experts who can professionally manage ranking topics at universities. The presented analyzes show that Polish universities, especially those from the IDUB group, should focus their efforts more strongly on the development of priority research areas, which is highly appreciated in global rankings "by subject".

In the course conducted by prof. Stanisław Kistryn, a panel discussion titled "European Universities Initiative - how does it change the landscape of the European Space for Higher Education and Science" representatives of several Polish universities participating in this project - including prof. Bogumiła Kaniewska, rector of Adam Mickiewicz University and prof. Piotr Stepnowski, rector of the University of Gdańsk, discussed the benefits that these universities have obtained from joining the initiative proposed in 2017 by President Emmanuel Macron. The panel participants also talked about the problems they have to face in the implementation of their plans, how they plan their further development and integration, and finally - what support from national and European authorities would be desirable to accelerate the construction of real Universities of the Future.

During the session on accreditation, led by prof. Krzysztof Jóźwik, rector of the Lodz University of Technology, with the participation of prof. Jarosław Górniak, vice-rector of the Jagiellonian University and prof. Andrzej Kaleta, rector of the University of Economics in Wrocław, the role of international accreditation in the strategic management of Polish universities was also discussed. Examples of program and institutional accreditations were presented and their translation into the improvement of university management processes in the area of ​​science, education and cooperation with the environment, as well as changes in these areas were presented.

- Academic rankings will survive and develop - this is the opinion of Alex Usher, head of Higher Education Strategy Associates from Canada, expressed during his speech (live!): "Higher education in the world - expert forecast", which opened the second day of the conference.

In this situation, it is necessary to get to know the methodologies of rankings "from the inside". During the session led by Justyna Kopańska, the leader of the Accreditation and International Rankings Section at Lodz University of Technology, recognized international rankings (Shanghai Ranking and U-Multirank) were presented, with particular emphasis on the presence of Polish universities among them. The session was attended by: Lu Wang, Ranking Manager, ShanghaiRanking Consultancy (online connection with Shanghai) and on-site present: Gero Federkeil, U-Multirank coordinator and Mirko Degli Esposti, vice-rector of the University of Bologna.

A lively discussion was sparked by the presentation by prof. Błażej Skoczeń, chairman of the Science Evaluation Committee: "Roadmap" of science evaluation in Poland - half a year before the start ". The perspective of the university was presented during this session by prof. Teofil Jesionowski, rector of the Poznań University of Technology, and the state of preparations for launching the evaluation IT system – by Marek Michajłowicz, deputy director of the PIB Information Processing Center.

Support for university IT systems after the pandemic was also the subject of a speech by Sebastian Kawałko from Asseco Data System, the technology partner of the conference.

During the session "Managing the area of ​​ranking competences at universities - good practices, problems, recommendations", the solutions that worked at universities participating in the International Visibility Project were presented from different perspectives, from the rector to a specialist in the field of rankings. Prof. Arkadiusz Wójs, rector of Wrocław University of Science and Technology, emphasized that the proper use of knowledge obtained through rankings helps to effectively manage the university.

- I am glad that we managed to organize this conference, also the on-site version, with excellent attendance, right now, before the start of the new academic year, which will be a serious challenge for the university authorities - says Waldemar Siwiński, president of the Perspektywy Education Foundation, head of the International Visibility Project. - After the break caused by the pandemic, it is necessary to consult regarding what to do to make Polish universities more visible in the world Academy.

Polish universities have such knowledge - the main challenge now lies in the effective implementation into our academic reality.