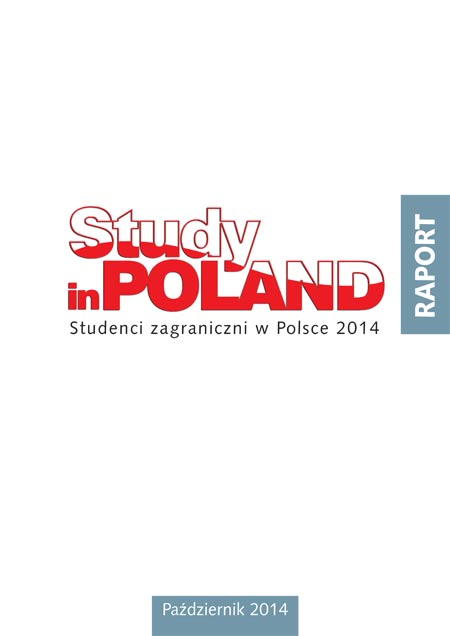 (Warsaw, 28 October 2014) Perspektywy Education Foundation published – for the fifth time now – the International Students in Poland 2014 Report, presenting in a comprehensive manner the overall situation and the newest trends in internationalisation of the Polish higher education. There are currently 35,983 international students from 149 countries studying in the Polish higher education institutions. This means an increase by almost 7,000 – 23% – over the previous academic year alone.

The report gives a full and comprehensive picture of this problem, so important for higher education both on the global scale and for each country individually. Internationalisation of higher education is one of the indicators of education development in the last decades of the 20th century and the first ones of the 21st. Over 4.5 million students study outside of their native land today and their number increases systematically. The advantages of this process are numerous and have been widely documented already. The main advantages are to the students themselves, but also their native and host countries.

How does Poland look against other countries? What are the similarities and differences in comparison with other European and world countries? The Report allows to form an opinion on this subject and provides a lot of interesting material for multi-aspect analyses.

First of all, it is clearly visible that, as in many other countries, the number of foreign students is systematically increasing. In the academic year 2005/2006 there were 10,092, i.e. 0.52% of the general student population. In the academic year 2013/2014 there were 35,983, which makes 2.32%. But it needs to be remembered that a higher percentage of foreigners in the general student population is partly also a result of the visible decrease of the general number of students in Poland.

Detailed data is presented in the table below:
Polish HEIs internationalisation indicator

High educational level in most Polish universities and relatively low costs of studies themselves draw an increasing number of young people to Poland.

Who studies in Poland?

No one should be surprised by the fact that among the foreigners at Polish universities the majority comes from European countries located relatively close to Poland.

In general Poland drew students from 145 states so far. A large difference in comparison with the Western European countries is a relatively low number of students from Asia (e.g. only 2% are Chinese).

Where and what are foreigners studying in Poland?

Foreign students are understandably mostly attracted to the best universities. Therefore there is no surprise in the fact that the highest number of foreigners may be found at the University of Warsaw (1690) and the Jagiellonian University (1556). Next most popular are University of Information technology and Management in Rzeszów (1535), Andrzej Frycz Modrzewski Krakow University (1290), Vistula University in Warsaw (1132) and the Medical University of Lublin (1037).

The popularity of individual study fields does not change significantly in time, however, the dynamics of increase in the number of students in various fields is obviously not identical and may be characterised by the chart below:
Increase of foreign students number, by study fields, in 2005-2013. 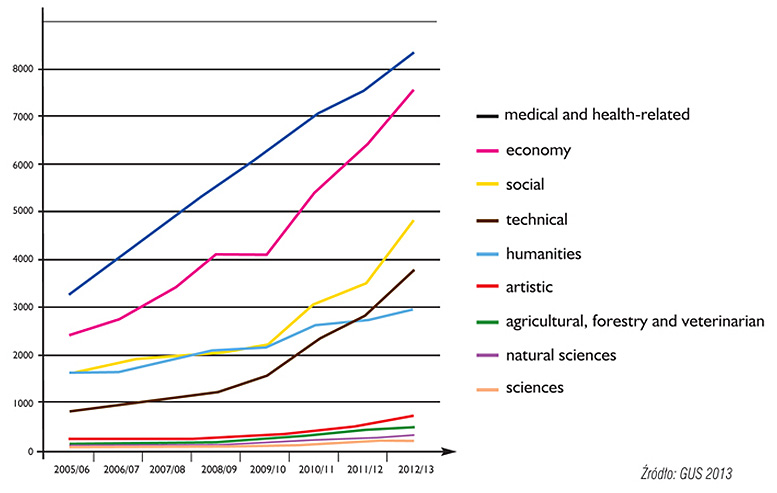 Medicine is becoming the Polish speciality for foreign students. So far it has attracted 6,236 foreigners (out of 71,447 medical students in general). This means the internationalisation factor of 8.74%, highest among different types of universities in Poland. For comparison: for universities (humanities) it is 1.5%, for technical universities 0.8%, and for economy universities 2.08%.

The majority among the students are Europeans (57%), but there are significantly more students from Asia (24%) and Northern and Central America (17%). The highest numbers come from the following countries:

All the Polish medical universities have courses in English, some have been offering them for the last 20 years. In total the medical universities offer 28 study programmes in English. This is undoubtedly one of the factors facilitating recruitment of foreign students. The problems listed in the report and requiring solution in the future include a relatively small number of foreign lecturers (approx. 30 persons out of approx. 1250 foreign lecturers in Poland).

The picture of internationalisation of Polish higher education, rich in numbers and facts, allows, according to the Report’s authors, moderate optimism concerning future growth of the number of foreign students in Poland. However, despite the spectacular increase in the last few years, there are much fewer foreigners studying in Poland than in other European countries and it is one of the least internationalised countries of the European Union.

For this reason the Report’s authors do not limit themselves to the detailed picture of the present state (showing e.g. the regional differentiation and individual study fields), but also propose their own solutions. A part of the publication is devoted to recommendations – proposed improvements concerning internationalisation of the Polish higher education. They are detailed and addressed to different levels of education and state administration.

The authors of the Report relied on the data collected (but not yet published) by the Central Statistical Office of Poland (GUS) for academic year 2013/2014, and data available at OECD, UNESCO and Eurostat (for 2011), IIE (for 2012) and Wissenschaftweltoffen (2013) as well on research conducted by The Perspektywy Education Foundation.

The Report International Students in Poland 2014 was prepared for the “Study in Poland” programme (www.studyinpoland.pl) run by the Conference of Rectors of Academic Schools in Poland and The Perspektywy Education Foundation.

More information: Dr. Bianka Siwinska, mobile +48 501 535 785, This email address is being protected from spambots. You need JavaScript enabled to view it.