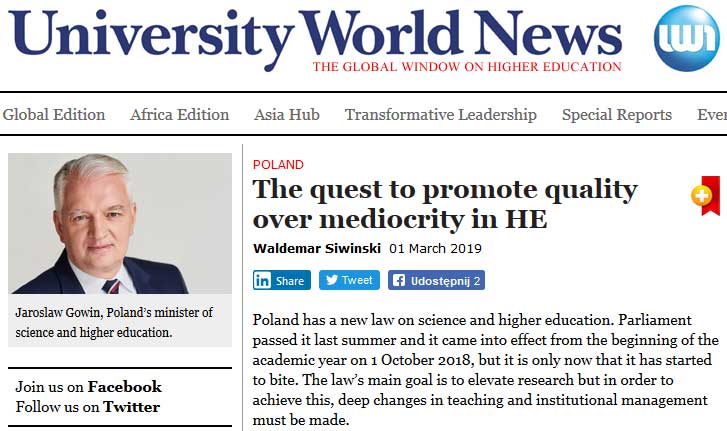 The quest to promote quality over mediocrity in HE

In its March edition the University World News published an article by Waldemar Siwinski: “The quest to promote quality over mediocrity in HE”. The author who is the President of Perspektywy Education Foundation in his article presents in detail the main aspects of the recent reform of Higher Education in Poland.

Poland has a new law on science and higher education. Parliament passed it last summer and it came into effect from the beginning of the academic year on 1 October 2018, but it is only now that it has started to bite. The law’s main goal is to elevate research but in order to achieve this, deep changes in teaching and institutional management must be made.

In order to understand why these changes have become imperative, some context is needed.

When the new, democratic political order replaced communism, Poland experienced an unprecedented demand for higher education. The existing 100 state institutions could not accommodate popular demand amid a demographic boom.

The figures speak for themselves: in 1991 the entire student population numbered 380,000, but by 2005 there were close to two million students in Poland. State universities, even if they opened their gates wider, were unable to absorb the crowds.

This disparity, naturally, had consequences. Lacking their own academic staff, many private institutions have used money to lure inadequately remunerated teaching staff from state universities to work part-time for them as well.

At the height of this period, almost every academic staff member held teaching jobs at two or three institutions simultaneously. Teaching took priority over research. It is no wonder the quality of higher education suffered and research in Poland lagged behind that in other European countries.

As it became obvious that the quality of higher education was in jeopardy, the Polish Accreditation Committee was established by the government in 2002 with the purpose of ensuring that higher education institutions adhered to quality standards. Better late than never.

Internationalisation was another area where Poland’s higher education was way behind European and global trends, with Poland having barely 10,000 international students (0.5% of the total student population) in 2005 and pitiful numbers of international academic staff (fewer than 2% in 2005).

After the country joined the European Union in 2004 and European funds started to pour into Poland, new opportunities opened up in the higher education sector. Universities invested European money first of all in infrastructure – new buildings, auditoria and laboratories were erected.

To commission construction of a building and to furnish laboratories with up-to-date equipment has, however, been the easy part. In order to make use of modern laboratories, you need well-trained researchers, but these have been lacking. In some institutions state-of-the-art pieces of equipment waited to be unwrapped for many months.

The other beneficial influence of EU membership on higher education was the introduction of a new form of financing research through grants.

Two new granting institutions were created to distribute funds for research based on competition: the National Centre for Research and Development (2009) and the National Science Centre (2010). This was an important new departure, paving a path for financing of research. Competition for grants replaced centralised budgeting.

All these much needed and helpful measures have not been sufficient. Something more had to be done to stop Poland from slipping down the international rankings. Not that rankings matter that much but, after all, in the era of globalisation, they do serve as an overall indicator of where things are going with regard to a country’s higher education and research in particular. The picture of Polish higher education is not a particularly positive one.

Jaroslaw Gowin, Poland’s minister of science and higher education, entered the government three years ago promising to overhaul and reform higher education and science. He has kept his word, producing a solid piece of legislation that is often referred to as the ‘Constitution for Science’.

Unlike many other laws that have passed recently through the Polish parliament, the ‘Constitution’ has been the subject of extensive, thorough discussions and consultations with the academic community over the past two years.

The new ‘Law on Higher Education and Science’ signifies a momentous departure from the established system in several aspects. If the reform goes through as planned, higher education and science in Poland will never be the same.

A new approach to evaluation

If achieving quality is the overall purpose of the law, the right key needed to be found to open the right door. The new approach to evaluation appears to be that key.

This led to an overlapping and doubling of efforts and wasted money and resources. It is not uncommon for the same discipline to be taught or researched in three or even five different units of the same university. Since funds used to be allocated to individual units, the rector had a limited ability to consolidate or improve the structure.

This is going to change: evaluation will instead be carried out on a university level, giving rectors more power and forcing research to be more concentrated through competition.

As part of the evaluation process, universities will be obliged to select 20 of their leading researchers and each will be asked to present four of his or her best publications from over the past four years. The process will, naturally, reveal the obvious: that there are many academic staff members who have no research to show despite long-term employment.

Universities will be faced with tough decisions. In order to get funding, a university will have to concentrate on disciplines where it does best and where it is strong. The staff members who can’t keep up with the pace of competition will have to go, though some kind of a cushion has been provided.

To execute these often painful manoeuvres, substantial changes in the model of university management have been prescribed. The role of the rector has been strengthened and rectors, not faculties or institutes, will be in charge of university finances.

Not only will rectors enjoy a stronger position, but universities will have greater autonomy to shape their own structures. It is now up to the university senate to decide, by adopting a statute, if the university will be divided into faculties or choose another internal structure.

The reform will have a strong human aspect. Academic staff will fall into three categories: those who concentrate on research, a group that combines research with teaching and a group that will just do teaching. A special professorship of didactics has been created in recognition of academics who do not do research but are outstandingly talented teachers so they can progress their careers.

The first results of the evaluations conducted by the Science Evaluation Committee (Komitet Ewaluacji Nauki in Polish) will be announced in 2021. The evaluation will mainly be based on hard bibliometric data coming from the databases of Elsevier and Clarivate Analytics. Preference will be given to publications in the leading international journals.

A new model of preparing academic staff will be introduced alongside doctoral schools. At the same time, the old system of the intermediate habilitation degree between a doctorate and professorship that led to academics not getting to the top until they were much older, has been tweaked. It will now be possible to go from a doctorate directly to a professorship.

All these changes are designed to make better use of the very limited financial resources available in Poland for science (0.45% of gross national product or GNP) and higher education (0.8% of GNP). The changes, in spite of some resistance from the academic community, will lead to diversification among higher education institutions. Most will continue to concentrate on teaching and some will focus on research.

Related to the reform project is the ‘Excellence Initiative – Research University’ project which should, by 2021, select a handful of research universities for extra funding. The process, that has already started, involves, in its first stage, the Ministry of Science and Higher Education selecting 20 universities to participate. Each of these institutions is working now on drafting a development strategy.

To stimulate internationalisation, additional funds will go to universities that engage in international cooperation, hire foreign staff or have a high percentage of international students.

A new agency, the Polish National Agency for Academic Exchange (NAWA), partly modelled on the German Academic Exchange Service (DAAD), was established in 2017 to support and stimulate international cooperation in the field of research and teaching.

Not everybody is happy about the reforms. Some, including those representing the humanities, fear they will be left behind when it comes to financing; others worry about their jobs and position.

Will the reforms succeed? The next two years will tell us how fast and how far they will go towards putting higher education in Poland on the right track. It is encouraging that steps are being taken to promote quality over mediocrity. It is hoped that excellence will result.